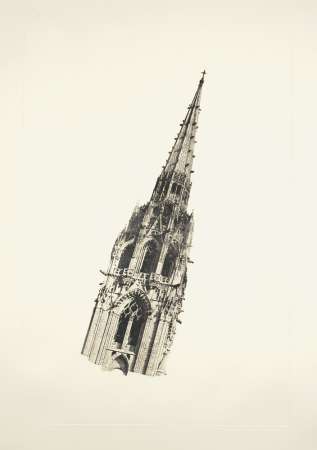 The last of Bunkall’s photogravures, titled Ascension, is an image he photographed of the north tower of Chartres Cathedral, his favorite. The spire is a wonderful example of early French gothic architecture. Bunkall chose an early form of photography, the photogravure, to depict the spire floating upwards, again referencing the released soul.

The photogravure began as an engraving technique known as photoglyphic engraving, patented in the mid 1800s. Photogravure is an intaglio printmaking process using a copper plate, coated with a light-sensitive gelatin tissue which has been exposed to a film positive and then etched into the plate. The printer forces ink into the depressed areas of the plate, wipes the surface of the plate and passes it through a press with a sheet of archival paper. This process forces the paper into inked incisions, where it picks up the ink and reproduces the detail and continuous tones of the photograph.

This limited edition photogravure is printed with archival ink on 100% rag archival paper. Each print is hand numbered, titled and estate signed with a certificate of authenticity. The print has a three inch off-white border with a deckled edge and is unframed in a clear archival protective sleeve, carefully packaged flat in a custom built folder for shipping. Please allow 2 to 3 weeks for packing and delivery.

Scroll to top
error: © Copyright Captain of the Stripes Press