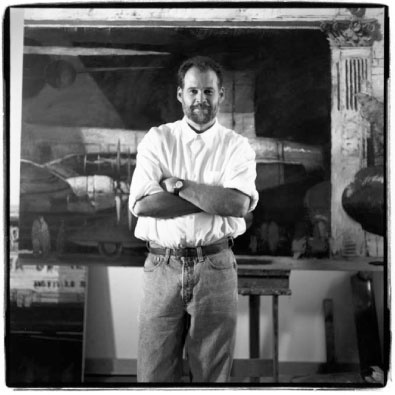 In a shortened career of twenty-five years, with a focused dedication to artistic integrity, Richard Bunkall created a significant body of work that was both original and emotionally compelling. His early work expressed simpler themes; themes that he later developed into spiritual and iconic masterpieces. He was able to tell the story of humanity and its vulnerability through his art. He embraced and glorified the creations of man and ensconced them in monuments of his own making; adeptly portraying man’s desire to create something more permanent than himself.

Recognized by his peers and acclaimed by the critical establishment, he was honored with Individual Painting Grants from the National Endowment for the Arts twice within five years. Bunkall was also a revered teacher at the prominent academic institution Art Center College of Design. He enjoyed sharing his knowledge and love of art, and was rewarded with respect and admiration from students, fellow instructors and administrators.

In 1994, Richard Bunkall was diagnosed with ALS, commonly known as Lou Gehrig’s disease. He met this challenge with the same humor, strength and dignity he had maintained throughout his life. In his last year, while his physical strength diminished, his passion for painting did not. He was able to produce and work until nearly the end of his life. But perhaps it could be said that Richard Bunkall’s greatest achievement was the impact he made on all who knew him – shaping their lives as they watched the way he was finishing his.

Scroll to top
error: © Copyright Captain of the Stripes Press